I- Photovoltaics at a glance

The photovoltaic effect refers to certain materials ability to convert solar radiation into electricity. This effect has been found in 1839 by Becquerel.

The most common photovoltaic cells are crystalline silicon based. Their dimensions are 156×156 mm² for 0.2 mm thickness. The efficiency is between 16% and 20%.

Several cells are encapsulated and interconnected into solar panels, the size is about one square meter. photovoltaic panels produce DC current under sun light. An inverter will create the alternating current that conventional appliances demand.

Photovoltaics used for auto-consumption : for systems without battery, one can use directly the electricity which is produced during daylight.

The house must be grid-connected in order to be able to consume electricity when there is no sun light.

The surplus of produced electricity can be either injected into the grid for free, either sold to an electricity supplier.

Photovoltaics used to sale the electricity : it is possible to sell the produced electricity (all or part) to an energy supplier at a feed-in tariff.

The amount of energy that is produced by a photovoltaic installation is expressed in terms of kWh (kiloWatt.hour). It depends on four parameters : 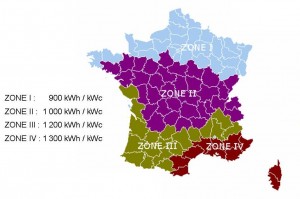